The green sign, which was attached to a pole underneath two legitimate signs, directed drivers to “Bob’s House.” The City Manager says the sign met traffic department standards and looked real. It’s not known who put the sign up, but it’s believed to be a local resident who wanted to make it easier for delivery drivers or friends to find his house.

The city has removed the sign and said it will not pursue any legal action against Bob, whoever he may be. But they’re holding onto the sign and have invited “Bob” to come and collect it, “no questions asked.”

Learning Guitar To Get LaidTommy Carroll 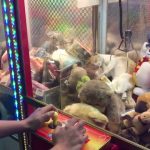