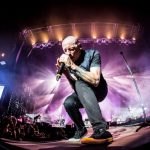 John 5 “I Pooped My Pants”Tommy Carroll