Celebrate your love of IPAs (and all things beer) at Rock ‘N Brew South Bend on July 8.

India Pale Ales are undeniably the most popular style of beer. You’d be hard-pressed to find a liquor store, beer aisle or brewery that didn’t have at least one type of IPA available. But what makes them so popular? Here are four reasons why you should “hop” on board the IPA train to beerville.

1. The flavors are dynamic

Look at any list of IPAs and you’ll find a wide variety of flavor in this style of beer — sometimes in a single pint. Many IPAs lean fruity, especially citrus fruits like orange and grapefruit, but you can find notes of chocolate, caramel, vanilla here as well. These flavors contrast with the bitterness of the hops to make a refreshing beer. Almost anyone can find an IPA that they enjoy.

Beer brewers are kind of like mad scientists, so it’s no surprise that brewers have experimented with IPA recipes to create new flavor profiles and sub-styles. American IPAs are the most common here in the US, but you can also find Imperial (or Double) IPAs, Session IPAs and English IPAs. Each sub-style has its own typical flavor profile. You can find beers that range from lighter in color to a darker amber shade with a medium body in the IPA style. If you want to get really into a style of beer without getting bored of the same-old flavors, the IPA is for you.

3. The alcohol is strong

The average Alcohol By Volume (ABC) for beer is 4.5 percent. IPAs, however, have an ABV range of 5.5 to 7 percent. No further explanation needed.

You know how to make a great beer better? Pair it with great food. According to The Splendid Table, hoppy beers like IPAs are best when paired with hard cheeses, fried foods, rich meats and deli sandwiches. That means you should enjoy your IPA with a juicy cheeseburger, an order of buffalo wings, mozzarella sticks or an extra-large club sandwich.

Celebrate your love of beer with 103.9 The Bear at Rock ‘N Brew! Buy your tickets now so you can sample over 100 INCREDIBLE beers (including several IPAs) at Four Winds Field on July 8. 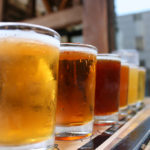