The bottle has a monkey on it, so that's pretty cool  He sees through an eye ball on his belly, that's pretty cool too.  According to the words on the bottle, this monkey is magical, with a golden soul.  No idea what that means, and honestly, dumb stuff like that doesn't belong on a beer bottle.  It also tells me this beer is made with “exotic spices from the East.”  That could be Toledo, I don't know.

Let's open and start drinking: Woof, I dig this.  The bottle told me it was “warming,” but I didn't know what that means.  I do now, it's kinda spicey, a little fruity, just a little.  I really like this this Triple Ale, even if it has Toledo Spices.

Straight out of Downingtown, Pennsylvania! I know, doesn't exactly have the N.W.A. roll-off-the-tongue. I am excited because a blue collar state like Pennsylvania knows beer! Victory is about an hour West of Philly and unlike the Eagles, has been doing well since McNabb left. A massive brewery expansion will be finished sometime this year.

I have gone a few rounds with Victory before (the beer, not actually winning at anything) and vaguely remember loving their Hop Devil.

Golden Monkey is tasty. Yeasty with a crispy aftertaste and damn, you can tell this thing is strong. Almost ten percent? Yeah, and you taste it too. I like these Belgian-style ales with a little punch and Golden Monkey delivers. This is one of those “if you're gonna have an ale, have an ALE” tasting beers.

Before I end this favorable review, I would like to applaud myself for not making a single penis joke because it has “monkey” in the name. Also a few more claps for not making a vagina crack when I used the word “yeasty.” And one more for passing up the word “clap” a sentence ago. Would have been too easy. Like your mutha *grabs crotch DAMN IT! 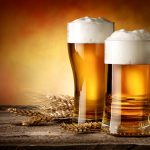